Days before 2017 began, the Missouri Department of Conservation responded to a tip and discovered the Emerald Ash Borer in Laclede County. Knowing that this pest can invade many surrounding areas well before it is spotted, we would like to give you information on the Emerald Ash Borer and options to protect your ash trees.

This metallic green beetle is native to Asia and was first discovered in the U.S. in Michigan in 2002, likely from shipped, packaging wood, such as pallets and crates. This insect only occupies ash trees and has since destroyed millions within the U.S.

According to the Missouri Department of Agriculture, the Emerald Ash Borer was first detected regionally in Southeast Missouri in 2008 and has since expanded its quarantine to 114 counties in Missouri. 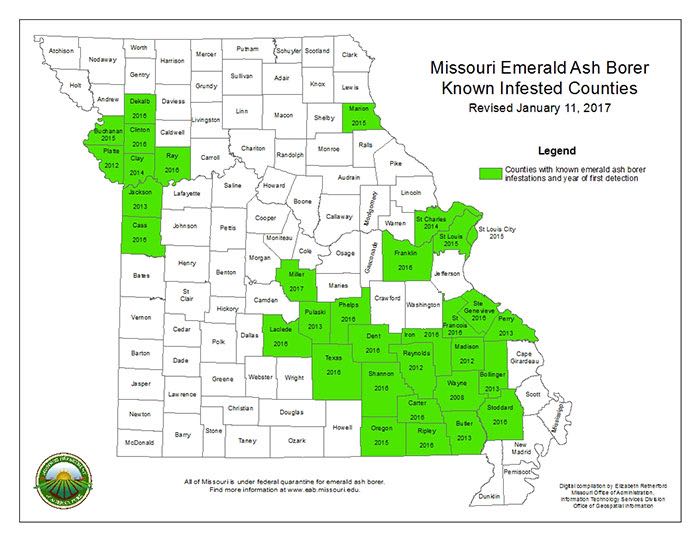 Life cycle: The adult Emerald Ash Borers emerge from holes it creates within the tree from April throughout the summer. The adults only live 20 days and are up to ½ inch in size.

During their emergence months, the females lay eggs on the surface of the bark. Females can lay about 75 eggs in their lifetime. The eggs will hatch in about 10 days into worm-like larvae. It is in the larval stage that tree damage occurs. The larvae spend their time under the bark as they pupate. Once in the pupae stage, they transform into sexually mature adults, then emerge from the tree in warmer months, therefore continuing the cycle.

Damage: During the larval stage, these pests bore into the tree’s tissues and feed as they make tunnels throughout the vascular tissues. With the vascular tissues being damaged, the tree cannot transport water and nutrients throughout, which disrupts its ability to function properly. Signs of Emerald Ash Borer will include entry holes and tunnels in the trunk of the tree. Symptoms (how the tree responds to the pest) might include one or many of the following: yellowing foliage, water sprouts, splitting bark, crown thinning, and dead branches. 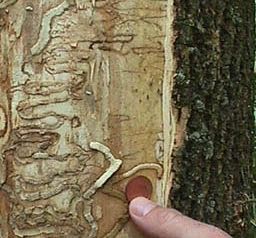 Since these symptoms are common among many other ailments, it is difficult to detect the Emerald Ash Borer without the help of an expert. Early detection is critical in saving the tree being attacked.

Tune-in to next month’s blog for information about our treatment plans for the Emerald Ash Borer.